Ukrainians by the thousands arrive in states, but with a time limit

by admin
in News

WASHINGTON — As the one-year anniversary of Russia’s full-scale invasion of Ukraine approaches next month, Ukrainians who were welcomed to the United States under a special program offering an escape from war are watching another timeline.

The temporary Uniting for Ukraine program, sometimes called U4U, offers a two-year stay in the U.S., given that individuals or families find someone, or an organization, to financially sponsor their stay. After that two years, the Ukrainians’ pathway to citizenship is unclear, if attainable at all.

Nearly 200,000 Americans have applied to sponsor those fleeing the war, with the majority of applicants from New York, Illinois, California and Washington, according to U.S. Citizenship and Immigration Services data from early January.

But a States Newsroom analysis finds thousands of sponsors from other metro areas also have stepped up, including from Philadelphia-Camden-Wilmington in Pennsylvania, New Jersey and Delaware; Portland-Vancouver-Hillsboro in Oregon and Washington; Miami-Fort Lauderdale-Pompano Beach in Florida; Cleveland-Elyria in Ohio; and Detroit-Warren-Dearborn in Michigan.

Even as Ukrainians are being accepted into the U.S., the State Department this week also announced that Americans will soon be able to privately sponsor any refugee’s journey to the United States in what the agency called “the boldest innovation in refugee resettlement in four decades.”

The new State Department pilot program, dubbed Welcome Corps, aims to expand capacity for refugees entering the U.S. It resembles the program for Ukrainians, but offers a permanent stay.

Rather than the government solely relying on nonprofit agencies to provide initial assistance for refugees, the new program will allow groups of at least five U.S. citizens or permanent residents to raise money to fund a refugee’s first 90 days in the U.S. and help the individual or family find housing, enroll in school and find essential services, according to the State Department.

Need to get in touch?

Have a news tip?

Volunteer sponsors will receive no financial incentives, and an oversight mechanism will be in place to prevent any abuses, a senior State Department official said Thursday.

The private sponsorship model has been a feature of recent U.S. humanitarian parole initiatives — including Uniting for Ukraine, Operation Allies Welcome for Afghans and most recently for Venezuelans — but has only offered temporary stays in the U.S., mostly in response to urgent situations.

Welcome Corps “incorporates lessons learned from other emergency initiatives launched over the past year,” according to a State Department press release Thursday.

This is the first time the U.S. will extend private sponsorship to those it defines as refugees — a person unable or unwilling to return to their own country because of persecution. Refugees have a pathway to permanent immigration status upon arriving in the U.S.

That is not the case for humanitarian “parolees,” a top concern for individuals and organizations who helped people in those groups — urgently evacuated Afghans after the U.S. withdrawal or the Ukrainians fleeing war through Uniting for Ukraine.

“HIAS was the first resettlement agency to augment network capacity through ‘welcome circles,’ partnering with American synagogues to receive Afghans and, later, Ukrainians,” said Mark Hetfield, president and CEO of HIAS, one of the refugee resettlement agencies that contracts with the U.S. government.

“We were, however, troubled that these newcomers entered the U.S. as temporary ‘parolees’—without the legal protections enjoyed by refugees, such as pathways to family reunion and a green card,” Hetfield continued in a statement Thursday.

“The Welcome Corps solves that problem by allowing groups outside of traditional resettlement networks to receive refugees with peace of mind — with pathways to family unity, green cards, and citizenship.”

However, it won’t solve the problem for current parolees, like those who fled the war in Ukraine. Welcome Corps will be distinct from any temporary humanitarian parole arrangements already in place, a senior State Department official said on a call with reporters Thursday.

While immigration experts say the Uniting for Ukraine process has allowed for a quicker path to the U.S., they also remain concerned about the long-term welfare of Ukrainians in the U.S.

“We have had significant concerns about the efficacy of bringing people in with humanitarian parole with no plan in place to allow them to adjust their status and stay if they cannot go home,” said Naomi Steinberg, vice president for U.S. policy and advocacy at HIAS.

Ukrainian parolees’ options are narrow and case-by-case when their two-year stay is up.

Ukrainians with relatives who are legal citizens may be able to pursue a family-based pathway to remain in the U.S. Those who were able to secure a job could pursue an employment-based pathway.

Others could try to apply for asylum, but they must prove fear of persecution in their home country based on race, religion, nationality or other protected grounds.

Depending on the timeline, some Ukrainians who were living in the U.S. or who arrived outside the U4U program can stay under Temporary Protected Status, or TPS, until Oct. 19. The U.S. extends the status to certain populations who can’t return home due to armed conflict.

The Biden administration launched U4U about two months after Russia’s invasion, a similar pathway to the one established for Afghans needing to rapidly flee following the U.S. withdrawal.

Communities across the country have welcomed 102,000 Ukrainians so far under U4U, according to the latest figures from the Department of Homeland Security, the agency managing the temporary humanitarian parole process.

Another roughly 38,000 have been authorized to book commercial air travel from Ukraine for their stay in the U.S. — meaning their financial sponsors were confirmed, and they completed all background checks and other required preparation steps.

Those looking to help as sponsors range “from everyday Americans living in everytown, USA, to big civic institutions, to national and international companies,” said Anya McMurray, president and COO of Welcome.us, an online platform that connects potential sponsors with Ukrainians seeking a way to the U.S.

The young nonprofit, originally established to help after the U.S. withdrawal from Afghanistan, has made roughly 1,300 pairings between sponsors and Ukrainians, and it’s revamping its online tool to connect Venezuelans and other populations.

“We wanted to bring those things together, that desire of Americans to help in their community and the transformational experience of welcoming a newcomer,” McMurray said. “Our fundamental belief is that by doing that we create greater capacity for America to welcome more people.”

The temporary parole process, based on a private sponsorship model, differs from the traditional route by which clearly defined refugees – those persecuted for reasons including race, religion or nationality — are resettled by the U.S. Department of State.

But while the temporary program offers limited benefits (though many benefits expanded under the supplemental aid package signed by Biden in May), the numbers of Ukrainians who have landed in the U.S. for humanitarian parole far outpace the permanent refugee placements that provide automatic pathways to obtaining a green card and citizenship.

Last fiscal year — from October 2021 to September 2022 — the U.S. permanently resettled just 25,465 refugees from 56 different countries, according to the latest Department of State data.

The administration plans to expand the temporary humanitarian parole process to certain groups as a way to stem Southwest border crossings while the U.S. continues to enforce the pandemic-era Title 42 policy, which allows law enforcement to expel migrants at the border based on public health emergency powers.

Biden announced in early January that the U.S. would extend this case-by-case parole process “modeled on the successful Uniting for Ukraine” program to up to 30,000 Haitians, Cubans and Nicaraguans per month in an effort to decrease land entries at the U.S.-Mexico border, according to DHS.

A similar program for Venezuelans was already underway.

HIAS criticized the expansion as a “deeply flawed and outrageously inequitable plan to expand Title 42 border expulsions of asylum seekers, while allowing up to 30,000 people from Cuba, Haiti, and Nicaragua who have sponsors in the U.S. to enter the country temporarily as humanitarian parolees — but only if they fly to U.S. airports.”

The organization fears a swell of parolees — those from Ukraine, Afghanistan, and the Caribbean —  living in “legal limbo.”

The brutal invasion in Ukraine displaced millions, with most — roughly 7.9 million — fleeing to surrounding European countries, according to the United Nations. 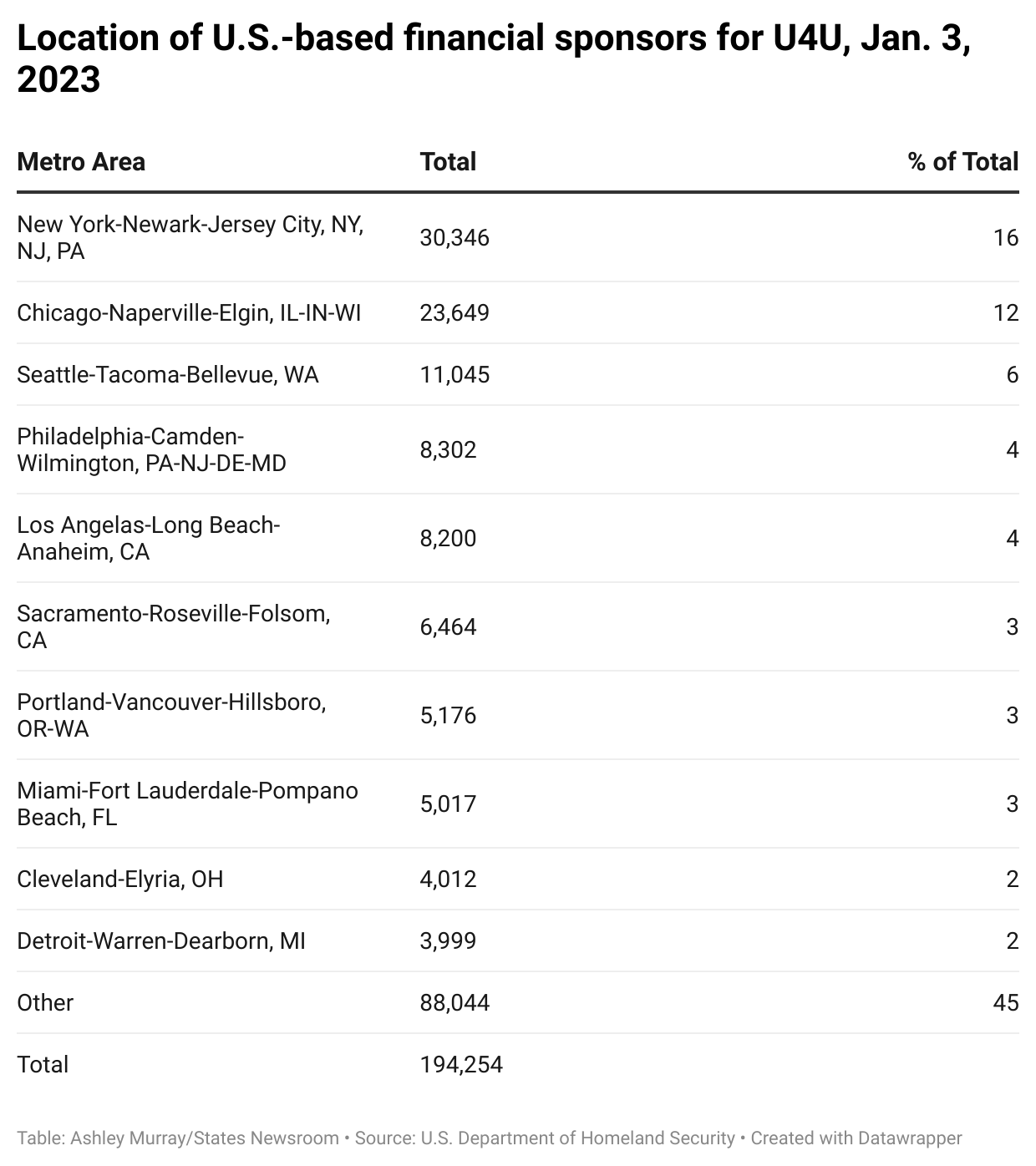 GET THE MORNING HEADLINES DELIVERED TO YOUR INBOX