by admin
in News

A mother of a middle school student was shocked when the Joshua Independent School District in Joshua, Texas, charged her over $7,000 in public records fees to disclose how many bullying reports the district had received since 2015. The Goldwater Institute first reported this outrageous demand for a simple sum of documents. The mother is combatting the exorbitant fee via an appeal to the Texas Attorney General’s Office.

The mother, Terrie Chumchal, filed the request following the district’s lack of aid over a two-year period of vicious bullying in which her son repeatedly tried to obtain help from his school, Loflin Middle School. Chumchal told The Daily Signal that her son suffered several severe instances of bullying, often regarding his Korean heritage, over his sixth and seventh grade years—including a violent choking and sustaining a ruptured eardrum.

After receiving word of these incidents, Chumchal learned that the school’s closed-circuit television cameras had recorded some of these instances. Chumchal’s first response was to ask the assistant principal, Emma Rogers, if she could see the videos of her son being bullied to gain a better understanding of the situation. Rogers refused, informing Chumchal that she had no right to see the footage and that showing her would violate the offending students’ privacy.

Chumchal claims that over the next few months, the administration changed its description of the bullying incidents, minimizing them so they constituted lesser offenses. Because Chumchal has never seen the videos herself, she cannot confront the district on the changing stories. After filing multiple grievances, the District has allowed her to watch only three videos since September.

Local parenting advocacy group Families Engaged for Effective Education claims that parents have every legal right to see videos of their students at any time—especially in situations of extreme distress. When the organization’s chairwoman, Mary Lowe, went to represent Chumchal for a scheduled grievance meeting with Joshua ISD, Superintendent Fran Marek ordered district police to send Lowe a criminal trespass warning.

Lowe told The Daily Signal that she believed “Marek ordered [her] removal via ‘trespassing’ in order to violate parents’ 1st amendment rights.”

Chumchal claims that as time progressed, Loflin Middle School began to intervene even less on behalf of her son. In several instances, Loflin refused to take disciplinary action after a group of students repeatedly harassed Chumchal’s son. In emails Chumchal provided to The Daily Signal, Assistant Principal Michael Clayton claimed that student harassment that originated off-campus didn’t fall under bullying per the district’s adopted “Bullying Checklist For Schools,” further claiming that it “did not interfere with his educational opportunities or disrupt classroom operations.” Loflin’s administration decided to simply separate the students.

The student reported that the harassment continued to take place on school property and in school classrooms and hallways (therefore interfering with educational opportunities and disrupting classroom operations). Two bullying reports provided by Mrs. Chumchal outline the victim’s thoughts clearly, claiming he was too scared to return to school: 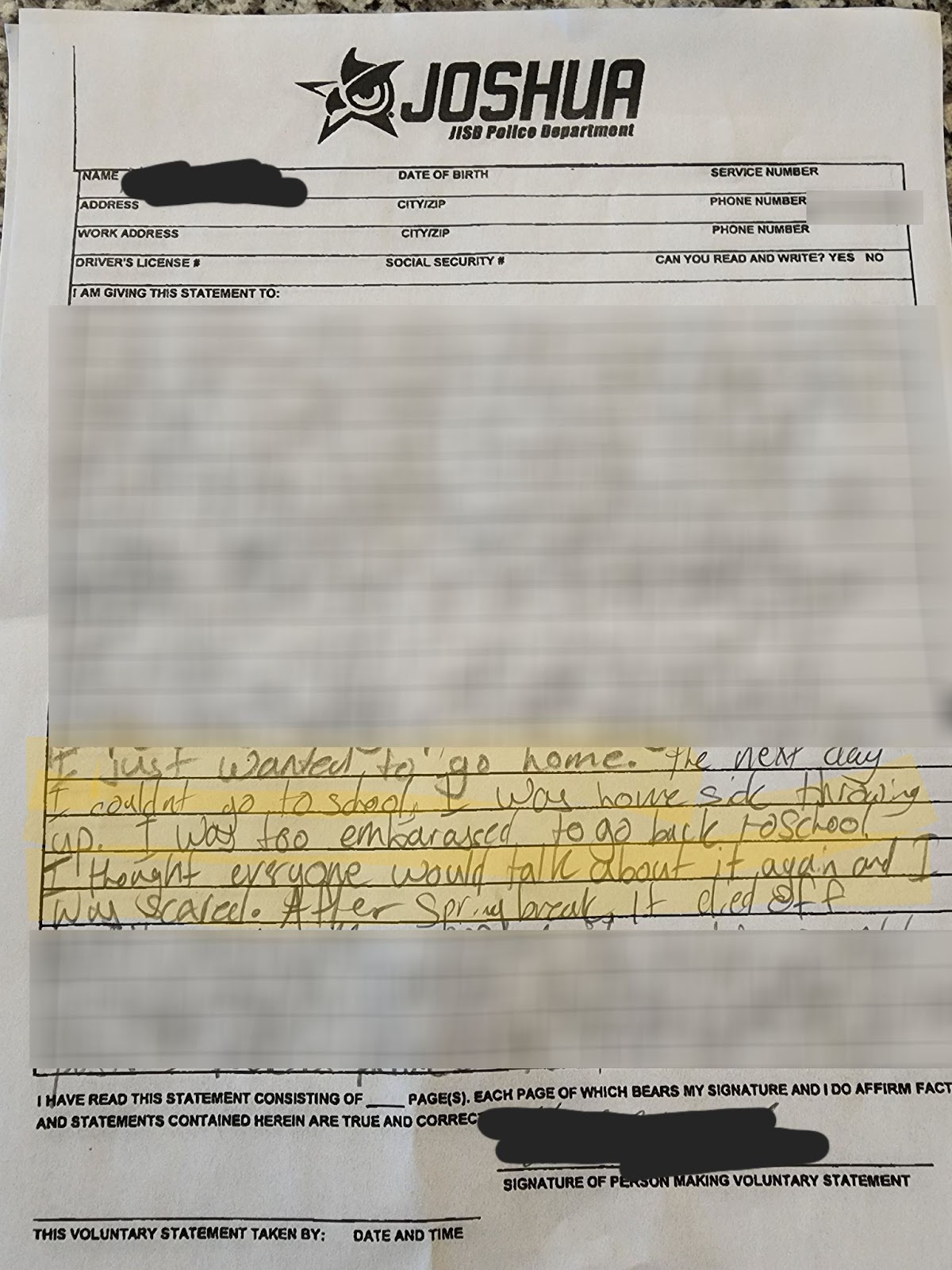 In a recorded October school board meeting, Joshua ISD board members were caught on a hot microphone laughing about the possibility of having to speak with Mrs. Chumchal, after a cup belonging to Mrs. Chumchal had been discovered. One member suggested she would “tell [Chumchal] where she could put that cup.”

The number of bullying instances occurring with her son and the district’s lack of action brought a dark question to Mrs. Chumchal’s mind. Chumchal told The Daily Signal, “If I had this many incidents that the district didn’t consider ‘bullying’, how many other parents or students have submitted bullying reports left unanswered or ill-attended to?”

Chumchal followed up by submitting a formal public information request to Joshua ISD directly, requesting the total “number of bullying, incident, assault, police, and grievance reports filed with the district between 2015 and 2022,” the Goldwater Institute reports. The law firm representing the district responded with a price tag of $7,111.12 on November 18, 2022.

The Daily Signal reached out to principal Seamster for comment and explanation. Law firm Leasor Crass intervened, responding via Felicia Webb, “This firm represents the Joshua Independent School District. I am reaching out on behalf of the District to hopefully provide some clarity on this matter. Please review the attached letter. Specifically, for your convenience, I have highlighted a pertinent paragraph on page 2 of the attachment that should clear up any confusion regarding the estimated charges.”

The rationale provided to The Daily Signal outlines that there are a total of 6,636 pages of content the district must sort through. Joshua ISD claims that, though the pages are all electronically stored, “the District’s system does not allow for electronic redactions,” so the district would have to print them all, obscure and redact “confidential information,” then rescan the documents into a file.

That would be a serviceable explanation if Chumchal was asking to see 6,636 pages of documentation—but that’s not what she asked for. She asked for the total numbers of a certain type of reports. This is as simple a request as if I asked a student to total and report how many English, math, science, and history assignments they received in 2022 by subject.

No, it is not necessary for the district to print, Sharpie, and rescan everything. That is lazy, bureaucratic thinking at best—blatantly dishonest at worst. Charging a worried mother over $7,000 for a handful of statistics is heinous—and leads me to several questions.

Why wouldn’t the district just open its document management software or learning management software (the portal, website, or software through which parents submit forms) and observe the total number of forms? Depending on the process, you could be done within fifteen minutes.

Even if the documents were all done via hand-written copy (very unlikely), and uploaded to a central server, they would be stored via central digital folders (like Google Drive or Dropbox) for administrators to access quickly.

I’ve seen this type of administrative behavior from my time in education administration. It appears the principals at Loflin prefer to condescendingly ignore parents rather than follow Texas law regarding bullying and cyberbullying. It’s also clear that after two years of repeated incidents, the district has done little-to-nothing to mitigate further acts of violence and bullying against Chumchal’s son.

Now that parents and media are looking around, the district’s law firm intervenes to provide an incorrect rationale on why they attempted to charge a distressed mother $7,000 for five numbers.

This cowardly strategy of withholding public information from taxpaying parents has become a common occurrence in American schools. A  Maryland school district charged a parent $5,000 for a request in June. Fort Worth ISD charged a parent $1,267.50 for trying to obtain a reading list. The Cedar Rapids Community School District in Iowa claimed 72% of the $2,006 bill to a parent was from “legal fees.”

With parental concerns rising around the country in the wake of the COVID-19 lockdowns, a desire for transparency in education has risen just as sharply. Parents have expressed these concerns to their local districts seeking answers and reassurance. Unfortunately, in the case of Joshua ISD, the district seems more intent on obfuscation, condescension, and mockery rather than working with parents.

Have an opinion about this article? To sound off, please email letters@DailySignal.com and we’ll consider publishing your edited remarks in our regular “We Hear You” feature. Remember to include the URL or headline of the article plus your name and town and/or state.

What Do We Know So Far?

Biden honors more than a dozen Americans for upholding democracy on Jan. 6