New Delhi [India], October 27 (ANI): In a bid to provide an eco-tourism hub to Delhi, Lieutenant Governor VK Saxena on Thursday dedicated the national capital’s first waterfall complex at Neeli Jheel, Asola Bhati Mines to the residents, according to an official statement.

The public recreational and educational space in the city is expected to help develop the area into a world-class eco-tourism hub.

“Inaugurated 4 artificial waterfalls at Neeli Jheel, Asola Bhati Mines. The first of their kind in Delhi, they will offer a delightful experience to people and rejuvenate the lake by enhancing dissolved oxygen. Look forward to more green recreational spaces in the Capital,” Delhi LG tweeted.

Speaking on the occasion, the Lt. Governor said, “This initiative, as indeed other incremental efforts being made in Delhi, emanated from PM Modi’s vision of rejuvenating the city and providing enhanced and augmented facilities to the capital’s residents.”

According to an official release, the complex has been established as part of LG’s efforts towards creating green and open public recreational spaces in the national capital.

“These waterfalls are expected to attract domestic visitors, tourists, school students, environmentalists and wildlife enthusiasts amongst others. Similar projects at various stages of completion in the city include Roshanara Bagh, Baansera, Asita East, Najafgarh Drain, and Anang Tal Baoli, etc.” the release said.

Notably, this is the fifth visit of the LG to Asola Bhati Mines, the first being on May 31 this year, which was five days after assuming the office, after his predecessor Anil Baijal stepped down citing personal reasons.

“On June 12, the LG visited the Sanctuary along with Chief Minister Arvind Kejriwal and Deputy Chief Minister Manish Sisodia when he outlined his vision of developing the site into an eco-tourism hub that could also work as water reservoirs for the city,” the release said.

“On July 24, as a part of the annual Van Mahotsav, the LG planted 1 lakh saplings in the Asola Bhati Mines forest area. On his fourth visit on October 16, the LG inspected the trial run of these waterfalls inaugurated today,” it added. 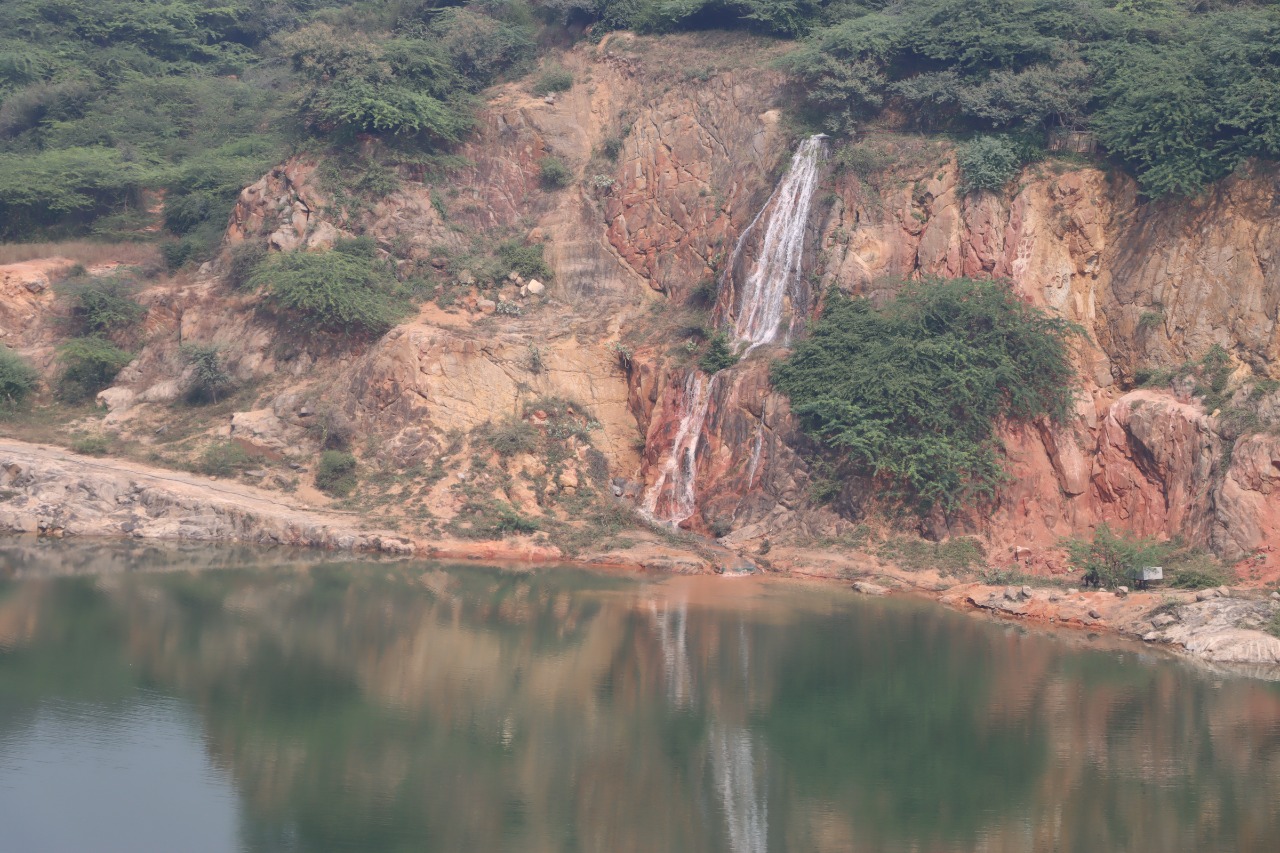 Located at a distance of approx. 5 km from the Maidan Garhi entrance inside the Asola Bhati Mines at Neeli Jheel, these four sites for the waterfalls were selected on the basis of their geological/morphological features. They have no sediments and are hard rocky patches that have surfaced after erosion of the sediments over the last three decades since mining activities were banned in the Bhati Mines.

The release further informed that the waterfall simulated at four different ledges/cliffs not only provides an eco-tourism hub with beautiful scenic views but will also support greater saturation of dissolved oxygen and facilitate the growth of flora and fauna in the stagnant water body.

“The surroundings of the Waterfall Complex have been provided with safe viewing points for the visitors. An existing structure belonging to the Forest Department at the site that provides a bird’s-eye view of the Neeli Jheel has also been refurbished,” it said.

Saxena directed the officials to make arrangements for a cafeteria and public toilets using all eco-friendly material so as to avoid any harm to the environment and for the convenience of the visitors.

He instructed officials to strictly ensure that no plastic is allowed inside the forest area. He also directed to deploy e-vehicles/electric feeder buses for the visitors coming to the Neeli Jheel.

“The Neeli Jheel has water round the year and its source is a mix of groundwater and the rainwater collected from the nearby areas. This year, on the instructions of the LG, a huge quantity of rainwater was diverted from the neighbouring areas to the Asola Bhati Mines with the help of pipes. As a result, the water level in Neeli Jheel has also increased by at least 3 meters as compared to the past years,” the release further said. (ANI)

Analysis: Boise’s sleepy school trustee elections could be a relic of the past