On Saturday, taking to Instagram stories, Kareena dropped a stunning picture with her BFFs.

The first picture features BFFs Kareena and Amrita as they struck a stylish pose in a library room at the ‘Good Newwz’ actor’s home.

Amrita was seen dressed in a black plunge neckline dress while Kareena could be seen wearing a white outfit.

Sharing the picture, she wrote, “When the Bff surprises you @amuaroraofficial.”

In the second image, the ‘Veere Di Wedding’ actor posed with her girl gang including Poonam Damania, Gaurie Pandit and Shibani Madhavlal Satyani. 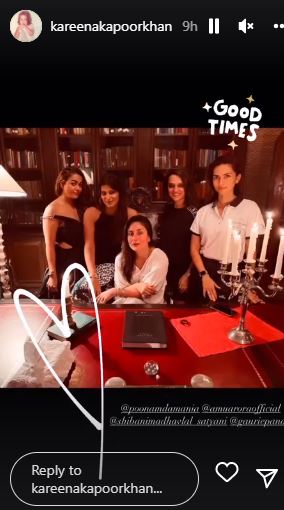 She captioned the picture, “Good times,” with a heart sticker.

Recently, Kareena shared a video of playing badminton with her husband Saif at Pataudi Palace.

In 2016, the two became parents to son Taimur and in February 2021 they welcomed Jeh. Saif was married to Amrita Singh before Kareena and they have two children together, Sara Ali Khan and Ibrahim Ali Khan.

Meanwhile, on the work front, Kareena was seen in ‘Laal Singh Chadha’ opposite Aamir Khan. She also recently wrapped up shooting her OTT debut project helmed by Sujoy Ghosh. The film is based on the Japanese novel ‘The Devotion of Suspect X’, which also stars Jaideep Ahlawat and Vijay Varma in the lead roles. (ANI)