Taking to Instagram, Sonam wrote, “My mother’s favourite…my introduction into fashion. This is so sad.”

Sharing a picture of the late designer, Manish wrote, “The fashion world has lost a visionary.” 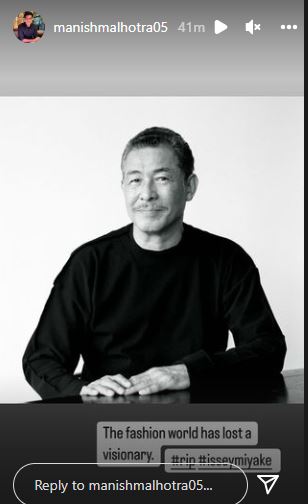 A funeral service had already been held with his family and close friends, his office said, adding that a memorial ceremony will not be held, in line with the designer’s wishes.

Miyake was part of a wave of young Japanese designers who made their mark in Paris from the mid-1970s. Today, his designs are preserved at institutions including London’s Victoria and Albert Museum, New York’s Museum of Modern Art and the Philadelphia Museum of Art.

Miyake was born in the Japanese city of Hiroshima in 1938. The bomb that was dropped on the city in 1945 left him with a pronounced limp that would follow him through adulthood, and his mother died three years later from radiation exposure, CNN reported.

Miyake received multiple awards for his work as a fashion designer and as an artist. In 2005, the Japan Arts Association awarded him a Praemium Imperiale for his outstanding achievement in the arts. A year later he became the first fashion designer to receive the Kyoto Prize in Arts and Philosophy for lifetime achievement.

The designer was also famed for producing the signature black turtleneck for his friend and Apple founder Steve Jobs. (ANI)