Washington [US], August 9 (ANI): Four-time Grammy winner singer-songwriter and actor Olivia Newton-John, who starred in the beloved movie musical ‘Grease’, has passed away at the age of 73, after a battle with breast cancer.

A statement shared by her husband, John Easterling, on her official Instagram handle confirmed the news of her demise. It read, “Dame Olivia Newton-John (73) passed away peacefully at her Ranch in Southern California this morning, surrounded by family and friends. We ask that everyone please respect the family’s privacy during this very difficult time.”

The statement continued, “Olivia has been a symbol of triumphs and hope for over 30 years sharing her journey with breast cancer. Her healing inspiration and pioneering experience with plant medicine continues with the Olivia Newton-John Foundation Fund, dedicated to researching plant medicine and cancer.”

Though Newton-John’s cause of death was not specified, she had been diagnosed with breast cancer that surfaced for the third time in 2017.

According to Fox News, the Australian singer was known just as much for her top hits, including ‘Physical’ and ‘You’re the One That I Want’, as she was for her starring alongside John Travolta in the classic film, ‘Grease’.

Following her demise, Travolta was quick to weigh in with a tribute on social media. “My dearest Olivia, you made all of our lives so much better,” he wrote.

The actor continued, “Your impact was incredible. I love you so much. We will see you down the road and we will all be together again. Yours from the moment I saw you and forever! Your Danny, your John!” Travolta’s wife, Kelly Preston, lost her battle with cancer in the summer of 2020. 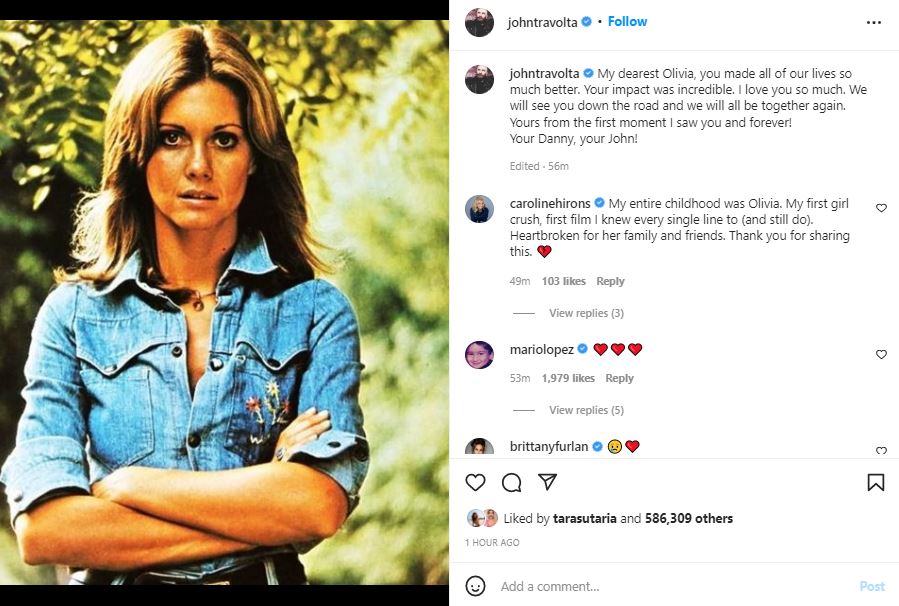 USA Today has reported, that born in Cambridge, England on September 26, 1948, Newton-John moved with her family to Australia at age 5. There she grew up singing and became a talent show winner at 16, which sent her back to England, following which she dropped out of high school to pursue performing full-time.

As per the outlet, her first major success as a pop star came in 1971 with the cover of Bob Dylan’s ‘If Not For You’, which hit the No 25 spot on Billboard’s Hot 100 chart and catapulted Newton-John to international stardom.

In 1973, ‘Let Me Be There’ got the singer her first Grammy, for best female country vocal performance. She collected two more Grammys next year for time record of the year and best post vocal performance, female, both for ‘I Honestly Love You’.

In total, Newton-John was nominated for 12 Grammys throughout her career, winning once more for video of the year with “Physical” in 1982.

Eight years before her death, Newton-John was honoured with the Medal of the Order of Australia, as per People magazine. (ANI)

Education is essential for Idaho’s prosperity. Here are some upcoming elections to know about.