After shooting for ‘Dunki’ in London for a while, SRK, who recently came back to Mumbai, took a day off from work on Friday and decided to pamper himself by watching Alia Bhatt’s film ‘Darlings’.

“Been working the last few days non stop….so needed to indulge in my favourite past time….’the love of my own person’ & to pamper myself, will spend the day with Prabhuji / Thums up and #DARLINGS (this is not an endorsement, just ‘mees spoilingss mees on a days offs pleaj,” he tweeted.

Helmed by debutant Jasmeet K Reen, Darlings is a dark comedy centered around the marriage of Alia Bhatt and Vijay Varma. The story is a powerful take on domestic abuse and revolves around Alia Bhatt’s retaliation after facing abuse at the hands of her husband Humza.

Shefali Shah and Roshan Mathew are also a part of the film, which was released on Netflix on Friday. ‘Darlings’, which is co-produced by Alia under her banner Eternal Sunshine Productions with Shah Rukh Khan and Gauri Khan’s Red Chillies, has been receiving rave reviews.

Ahead of the release of ‘Darlings’, SRK had shared how anxious he is about the film.

In a tweet, he had written, “Lil one I am also so anxious that u shared the responsibility of Eternal Sunshine Productions first film with me…that I will be biting my nails till it releases. But I feel we have a lovely film and u r the soul and sunshine of all things Darlings.” 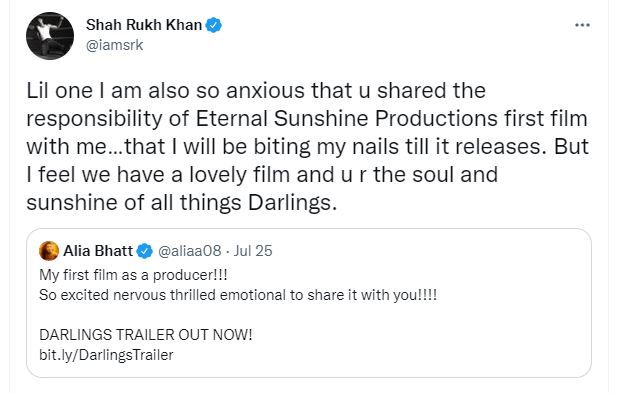 Responding to the tweet, Alia said, “And you are my eternal favourite actor/person/producer ever! Thank you for doing this with me … and post the release we can both get a manicure and pedicure since all the nails will be bitten haha! Love you the most.”

For the unversed, Alia and SRK share a cordial relationship ever since the two starred together in ‘Dear Zindagi’, which was released in 2016. Shah Rukh played the role of a psychiatrist called Dr. Jehangir Khan. While treating Alia Bhatt in the film, Shah Rukh’s character gave important life lessons to the audience with his powerful dialogues. The film emerged as a hit at the box office. (ANI)

No Wonder We Lost Trust in the Expert Class

Analysis: Boise’s sleepy school trustee elections could be a relic of the past