The ‘Hasee Toh Phasee’ actor took to her Instagram Story and posted a picture with Akshay.

In the photo, Parineeti was seen dressed in a white top with a pearl neckpiece and earrings, whereas Akshay wore a black tuxedo. She captioned it “missing u at shoot”.

Recently, Parineeti dropped a post on her Instagram handle and announced that the ‘Kesari’ duo is all set to collaborate with Akshay Kumar once again for Pooja Entertainment’s upcoming project.

She wrote, “We are back This time the Kesari duo may be shooting in York, but the laughs, jokes, games and Punjabi gupshup is the same.” 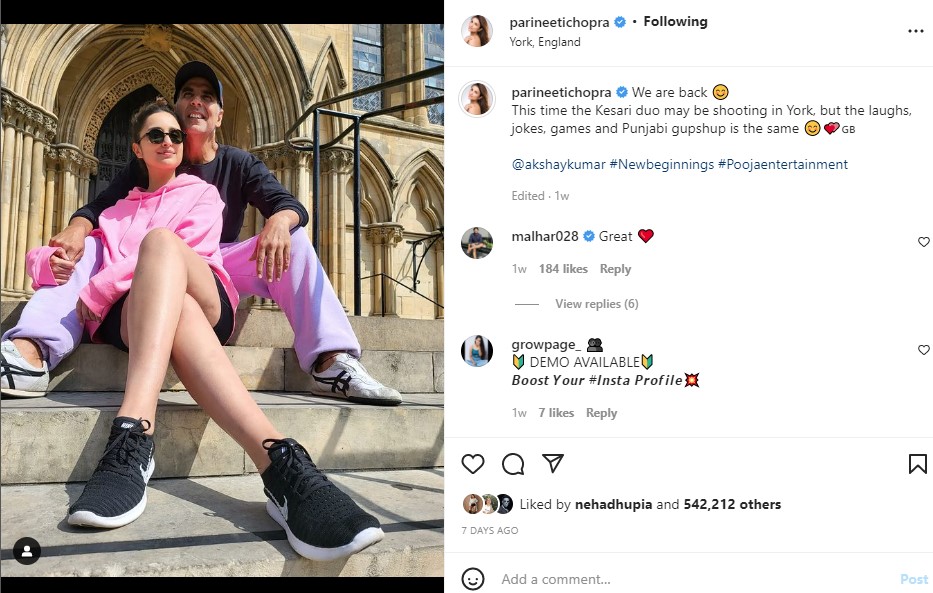 The untitled film marks the second collaboration of Akshay and Parineeti after their super-hit film ‘Kesari’ in 2019. The official announcement of the film is still awaited.

Meanwhile, on the work front, Parineeti will be next seen in Sooraj Barjatya’s upcoming family entertainer ‘Uunchai’, which also stars Amitabh Bachchan, Anupam Kher and Boman Irani in the lead roles. The film is slated to release on November 14, 2022.

On the other hand, Akshay has last seen in director Chandraprakesh Dwivedi’s historical drama ‘Samrat Prithviraj’ opposite former Miss World Manushi Chillar. It was produced by Yash Raj Productions and was released in theatres on June 3 this year. Sanjay Dutt and Sonu Sood starred in the film as well.

Apart from that, he is also a part of the comedy-drama ‘Raksha Bandhan’. Directed by Aanand L Rai and written by Himanshu Sharma and Kanika Dhillon, the film is produced by Colour Yellow Productions, Zee Studios, and Alka Hiranandani in association with Cape of Good Films. (ANI)

Oklahoma Watch: Schools wait to learn how to police their bathrooms after SB615 | Education

With the passage of the PACT Act, our nation can rewrite veterans’ stories with a happier ending